The Labour and Employment Ministers of BRICS Nations met for the first time at Ufa, Russia in January 2016 to deliberate upon core labour and employment issues concerning them like informality in the labour market, labour mobility, social security and ensuring decent work with the aim to attain the sustainable goals of poverty alleviation and employment generation..

The First BRICS Labour and Employment Ministers recognized that setting up of an Employment Pillar is essential and thus laid the foundation of BRICS Employment Working Group (BEWG).

The Labour and Employment Ministers of BRICS countries met again at the margins of 105th Session of International Labour Conference in Geneva, Switzerland, from 30th May-10th June, 2016 and discussed issues of common interest to the group like employment generation, SMEs, transition to informality and possible modes of cooperation amongst them.

The BRICS Labour & Employment Ministers’ meeting under the Indian Presidency has been convened on September 27-28, 2016 at New Delhi. The Ministerial meeting would be preceded by the BRICS 2nd Employment Working Group meeting on September 26, 2016, at New Delhi. It has also been proposed to engage with BRICS national social partners as agreed in the BRICS Employment Working Group Meeting held at Hyderabad on July 27-28, 2016. 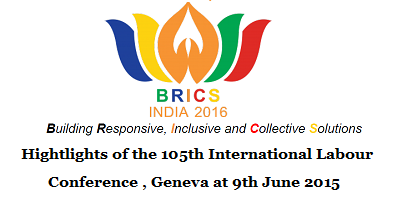